Chapter 2: The importance of data, evaluation and research

Innovation in the way we collect and use data, research and evaluation is vital to form a comprehensive picture of mental health in Australia, and to effectively monitor, evaluate and report on mental health and suicide.

The Commission welcomes the increasing focus on strengthening the evidence base for mental health and suicide prevention. Decision making, policy and program development, and service delivery are facilitated by robust and timely collection and use of data, effective evaluation, and innovative and targeted research. This chapter presents current data on prevalence and burden of disease, and discusses recent activities in data collection, evaluation and research.

Prevalence and burden of mental illness and suicide

To address the economic and social burden of mental illness and suicide, we need to understand the extent to which the population experiences mental illness. There are currently four national population surveys that provide an overview of the prevalence and impact of mental illness in Australia. These include the suite of surveys under the National Survey of Mental Health and Wellbeing (Box 3) and the Australian Bureau of Statistics (ABS) National Health Survey. Current prevalence estimates are presented in Snapshot 1. Reliable and timely data on suicide and suicide-related behaviours also helps to inform approaches to suicide prevention. Selected data on suicide and psychosocial risk factors is presented in Snapshot 2.

The National Report 2019 highlighted the importance of data for policy development and system reform. The Productivity Commission’s final report also emphasised the significance of data and recommended that national prevalence estimates are routinely collected no less than every 10 years.

All three surveys based their classification of mental disorders on existing diagnostic criteria to estimate prevalence. Prevalence estimates will be updated through the Intergenerational Health and Mental Health Study (see below). Until then, the National Survey of Mental Health and Wellbeing remains the only national estimate of common mental distress in adults that captures undiagnosed mental disorders. Data from the National Survey of People Living with Psychotic Illness, and the Australian Child and Adolescent Survey of Mental Health and Wellbeing provides the only reliable, national estimates for psychotic illness and mental distress in children and adolescents.

In August 2019, the Australian Government committed to funding another collection of prevalence data through the National Study of Mental Health and Wellbeing, as part of the Intergenerational Health and Mental Health Study, which will consist of four surveys over three years. Although it is a one-off study, it is hoped that future collections will occur.

The first phase of the Intergenerational Health and Mental Health Study has commenced. The study will measure the prevalence of mental illness, and provide updated statistics and insights into the impact of mental, behavioural and other chronic conditions on Australians; the use of health services and barriers to accessing them; and other health topics. 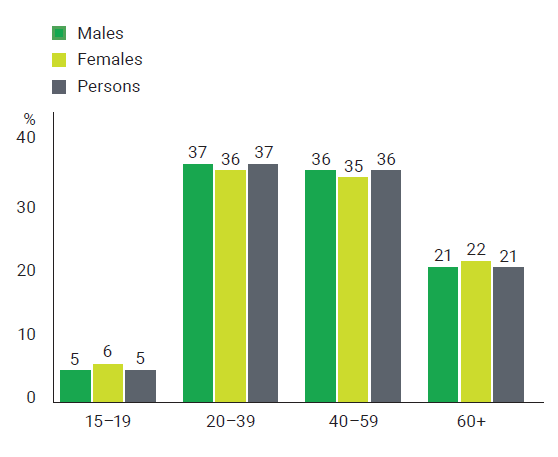 The availability of, access to, and use of, timely data can facilitate improvements in mental health service delivery, promotion and prevention. This is consistent with the World Health Organization’s Mental Health Action Plan 2013–2020, which has highlighted the need to strengthen information systems, evidence and research as a key mental health priority.

Australia has made some investments in the collection of national mental health data since the beginning of the National Mental Health Strategy in 1992. This has resulted in quality data on use of mental health services, seclusion and restraint, and consumer experiences of services and clinical outcomes such as the Your Experience of Service (YES) National Best Endeavours Data Set (Box 4).

The Your Experience of Service (YES) survey aims to help mental health services and consumers to work together to build better services, by helping to identify specific areas where consumers believe quality improvements can be made. The survey asks respondents to rate their experience of care. It also asks questions about how often the service showed respect for their dignity and privacy, and actively included them in deciding their own care.

The detailed results can be used by services to inform ongoing improvement efforts and can also be aggregated to provide an overall picture of the performance of mental health services. Currently, three states—New South Wales, Queensland and Victoria—have implemented the YES survey in mental health–related hospital and community mental health settings, and are contributing to a publicly reported data collection.

There are differences in how each state uses the YES survey. In New South Wales, consumers are offered the YES survey during every hospital stay or community health centre visit. In Victoria and Queensland, consumers are offered the YES survey in a particular week or month of the year. While each state has chosen the survey delivery method that best suits their local needs, differences in collection practices make comparison difficult and reduce opportunities for jurisdictions to learn from each other about how best to meet consumer needs.

In 2018–19, 31,282 YES surveys were collected from 86 mental health service organisations. Results suggest that the majority of mental health care provided meets the needs of consumers, with more than 70% of respondents across the three states rating the admitted care (acute care) they received as ‘good’, ‘very good’ or ‘excellent’. However, 14–25% of consumers reported a ‘fair’ or ‘poor’ experience of their admitted patient mental health care (see Figure 8). In 2018, the Australian Government Department of Health funded the Australian Mental Health Outcomes and Classification Network to develop a version of the YES survey suitable for use by Primary Health Network (PHNs), with a focus on consumers receiving mental health services and, potentially, alcohol and other drugs services.

A co-design approach was taken to ensure that the views of PHNs, commissioned service providers, and consumers and carers informed the content of the measure. The draft survey was tested in several PHNs. Analysis of the field trial data indicated that the survey demonstrated good internal consistency and satisfactory test–retest reliability. In April 2020, the survey became available for use by all PHNs.

Attention to the reliability and reporting of data related to suicide deaths has continued to increase. The evidence produced by collective government efforts has been supplemented by evidence produced via robust academic research through Australian academic institutions and international research (Box 5).

However, gaps and limitations in Australia’s mental health data infrastructure hinder attempts to develop timely evidence-based policy responses, as well as attempts to monitor the performance of the mental health and suicide prevention system.

Some key issues identified by the Productivity Commission in its report include the following:

Without these vital pieces of information, the current picture of mental health in Australia is incomplete. The Commission supports the need for a more coordinated, forward-thinking national approach to data collection, including the type and quality of data collected. This will require collaboration across jurisdictions and key stakeholders, and clear coordination points for collation and interpretation of data received.

In April 2019, the Australian Government committed to establishing a new national system for collating and communicating information on suicide and self-harm. The Australian Institute of Health and Welfare (AIHW) is working with the Commission to develop this system, with support from an Expert Advisory Group and Lived Experience working group.

The public interface was released in September 2020 on the AIHW website (and is accessible from the Commission’s website). A separate state and territory information portal will be available in mid-2021 to support government policy makers and program managers. The content on both sites will be regularly updated as new data becomes available.

The Million Minds Mental Health Research Mission (announced in May 2018 as part of the Long Term National Health Plan) will invest $125 million over 10 years from 2018–19 in innovative mental health research. The mission aims to support 1 million Australians with mental health issues access new approaches to prevention, diagnosis, treatment and recovery by encouraging translation of research into practice.

To date, the mission has funded $27.4 million in grants for seven research projects in the areas of Aboriginal and Torres Strait Islander mental health, child and youth mental health, and eating disorders.28 An additional $10.3 million in grants was announced in May 2020 for three research projects focusing on suicide prevention.29 The Australian Government has also announced $3 million of funding under the mission for rapid research into improving the response of mental health and suicide prevention system to the COVID-19 pandemic.

Evaluation and research are required, alongside data, to build a comprehensive picture of mental health in Australia, and to drive improvements in policy and practice. Evaluation and research in mental health are also critical to the evidence base for clinical care, to targeted investment in prevention and early intervention, to understanding the progress of existing reforms, and to support the case for future reform.

Routine evaluation provides valuable information about how well programs are working, how they can be improved and new areas for development. Specifically, robust evaluations inform how funding should be allocated to improve service delivery, and ultimately the outcomes for people accessing mental health services.

The Productivity Commission inquiry into mental health highlighted a clear lack of program evaluation across all levels of the mental health and suicide prevention system. It made a suite of recommendations designed to develop and promote a culture of evaluation. Key factors driving this include:

Mental health and suicide prevention research is pivotal in the implementation of new knowledge. It also drives innovation by generating knowledge and evidence about prevention, causes, impacts and treatment of mental illness.

Australia performs well internationally in mental health and suicide prevention research. Analysis of research published in mental health and suicide prevention indicates that, in the category of general mental health, around 12% of Australian publications are in the top 10% of those most highly cited, and around 20% are above world average citations during the past 10 years (2007–2017). Australia is also rated 10th internationally in terms of publication volume, equivalent to about 2.5% across all mental health–related areas of research.

Despite Australia’s strong performance in research, and the significant global and national burden of mental illness, investment in mental health research is significantly lower than for other health-related fields. For example, recent analysis by the International Alliance of Mental Health Research Funders found that, although mental ill-health in Australia and New Zealand accounts for more years of life lived with a disability than physical ill-health, mental health research receives less funding than research into physical conditions such as infections, cancer and cardiovascular disease (Figure 9).

Figure 9: Research funding in Australia and New Zealand for selected fields, including mental health, compared to measures of disease burden At present, mental health research in Australia does not have an overarching strategy and is therefore largely driven by two factors: investigator-initiated grants funded through a variety of peer-reviewed processes such as the National Health and Medical Research Council; and targeted funding through vehicles such as the Medical Research Future Fund (MRFF), where specific research priorities are identified, and investigators apply within that priority area. There is also a dedicated Suicide Prevention Research Fund, established in 2018.

The complexity of the mental health system and the changes it is currently undergoing require the development of a clear strategic approach to prioritising research objectives, targeting research funding, improving data collection and sharing protocols.

Australia’s first national mental health research strategy is currently being developed. It aims to provide a principles-based framework to inform planning, funding, conduct and implementation of mental health research in Australia. A task under the Fifth National Mental Health and Suicide Prevention Plan (Fifth Plan) is to develop a research strategy to drive better outcomes across the mental health sector in Australia. The Commission is working in collaboration with people with lived experience, carers, states and territories, research funding bodies and prominent researchers to develop the strategy.